Here in these Chapters, we are going to tell you everything you need to about CHIEF UDO EKANEM UDO.

The 28th President of the United States of America, Woodrow Wilson (1550-1924) once said “You are not here (on earth) merely to make a living but to make the world a better place”.

This assertion is true of our patriarch, late Leader (Chief) Udo Ekanem Udo who lived his life generally to impact on humanity. 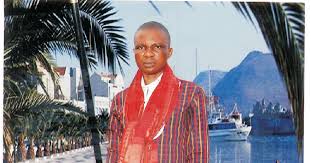 Thereafter, he went over to the Central Academy School, Enugu in the present Enugu State where he obtained the RSA III Certificate in 1957.

Since caring fathers of old never allowed their male children to live and operate alone especially when they came of age for marriage, his father, Late Obong Ekanem Udo Udo Akpan Ebu had to look for a wife for his vastly growing second son.

It was then that Chief Ekanem discovered a young, slim, fair and innocent looking Miss Nkoyo Akpan Inyang of Asanting Ikot Efrede who was then serving as House-help to Late Chief Akpan Ekanem Udo.

Miss Nkoyo Inyang, charming, elegant and conspicuously pretty till date was automatically accepted by Leader Udo as a wife and accordingly, traditional marriage was immediately consummated in 1961.

This great union was blessed with eleven (11) lovely children out of which nine (9) – three males and 6 females are alive till date to mourn the departure of their icon.

He loved and cared for his children and his beloved wife so dearly and he never forget to cherish and call her “Eka Koko”. The wife in return will answer and address him as “U.E.” (meaning Udo Ekanem).

Leader (Chief) Udo Ekanem Udo was born into a Christian family where his parents were core members of Methodist Church, Mbiafun Ikot Abasi.

He was later baptized and became a full communicant in the church. He thereafter became very zealous  and diligent in church activities to the admiration of other members and the ministers alike.

Arising from his persistent zeal and outstanding qualities, he was accordingly appointed a leader in 1975 to compensate for his unmatchable commitment to Church work. This gave him the impetus to head so many Church committees and meetings.

After the creation of Mbiabong Circuit, Leader (Chief) Udo Ekanem Udo was appointed the 1st Quarterly Meeting Secretary in 1991. He served on this post for good eight years until 1999.

As one of the outstanding and outspoken personalities in the Church at that time, he contributed in no small measure to the re-structuring and upgrading of the local church in Mbiafun Ikot Abasi to the present enviable standard.

As indicated in the above preamble, Leader (Chief) Udo Ekanem Udo lived a life of service both to God and humanity.

He grew to become an umbrella both to his Children, brothers and friends within the village and the surrounding communities.

It would be recalled that in 1974 when he returned from Asanting where he had sojourned with his parents in his youthful days, he hurriedly erected a permanent building where he accommodated all his junior brothers each with a separate room.

He thereafter took it upon himself to train them and after successful completion of their education or trade apprenticeship; he ensured that those qualified were given Government employment while he settled others with trades and other occupations of their choice.

This is a fact that can never be contested by anyone in this village. His zeal for the Education of people and giving them gainful employment did not stop with his brothers alone.

He outstretched his hands to cover relatives and friends alike in Asanting, Abiakpo Ibo, Ikot Abia Osom and within his immediate communities of Mbiafun Ubot Oko, Eyehedia and Mbiabong Ikot Udofia. What an unbreakable quality of extreme generosity.

Leader Udo Ekanem Udoh loved his community dearly and was irresistibly admired by everyone. A decent man who loved appearing neat at occasions with his eloquence in spoken and written English, no wonder he was usually made Chairman at any top function within this village and community.

It is our believe that these qualities singled him out for appointment as Secretary/Spokeman at the land dispute settlement committee between Mbiafun group of villages and “Obon Ukpa” people in the present day, Abia State. This boundary committee was jointly set up by Akwa Ibom and Abia State Governments in 1985.

It is a great testimony that he did not disappoint this village because he ensured that what rightly belonged to us was returned with matching orders.

Titia Udoh (as was fondly called) extended this love and unifying factors to his immediate family dating back to the period when late (Hon) Chief Akpan Ekanem Udoh of blessed memory was alive.

This love was conspicuously displayed when his late senior brother Chief (Hon) Akpan Ekanem died in 1996. He ensured that, this great man was honourably and decently buried, because he saw all, he heard, he fought and conquered just like the mother Eagle.

It will not be forgotten in a hurry that it was late leader (Chief) Udo Ekanem Udo together with late Chief James Akpan Obong, Late Chief Akpan Ekanem Udo, Late Chief Etim Mbo, Late Chief John Okpot, Ette Ekanem Ubot Oko, Sir Etim Akpan Akpakpan came together to form “Mmanamo Day”. This later metamorphosed into the present Day Mbiafun Day held on 23rd December of every year meant specifically for the development of our village and community.

Also in consultation with his Late Senior Brother, Chief Hon. Akpan Ekanem Udo, he fought and obtained approval for the building of Odoro Ikono Secondary School presently sited at Mbiabong Ikot Udofia. As a result of this singular achievement, the parents/Teachers Association (PTA) of that school approved the naming of one of their dormitories to reflect our family’s name – “Ekanem House”.

A man specially created to outgrow any circumstance that came his way, calm and very calculative in taking decisions but stern and fearful when provoked. He carried an aura of boldness and intimidating personality anywhere he went. Such were the characteristics of the man quietly sleeping in the casket here before you all. Irrespective of all these he was a husband to one and only dear wife, Eka Koko (as he used to call her).

His love for his children was uncompromising and shall ever be remembered for his advice, care and kindness Indeed he was a great man. Till death, he remained an Elder Statesman, king maker, a devoted community leader and a strong member of the PDP.

He later transferred his service to Ministry of Education as a Storeman in 1971 and accordingly deployed to the Zonal Education Office, Ikot Ekpene.

This posting gave him the opportunity to tour several primary schools to distribute free books, other reading materials and desks which was a free program initiated by then UPE.

It should however be noted that Methodist Primary School, Mbiafun Ikot Abasi was a direct beneficiary of these donations, courtesy of the benevolence of this compatriot – Late Leader Udoh.

In 1984, he successfully retired from the service of Akwa Ibom State and was thereafter appointed member of Ikono North District Court in February 1987.

He served meritoriously till the end of his tenure in 1991.

It should be remembered that he established one of the best Disco sets in this part of the globe known as National Disco and was managed by Brother George Usoro.

Even though  Leader (Chief) Udo Ekanem Udo has advanced in age, he was still very strong and agile. He was always seen relaxing in a low seater beside his building either discussing with friends and colleagues or advising and giving directives on issues concerning the village.

Later he fell ill and was taken to Urua Akpan General Hospital for Treatment. Little did we know that death was playing in hard trick on us so at exactly 5 pm on 30th June, 2015, Daddy breathed his last and passed on to the great beyond.

Daddy your sudden departure has been so impactful and grievous quite beyond our imagination. You were a shield to everyone of us and you touched the lives of us all. You were very special, just like a magic candle that lit up everywhere.

In grief, we continue to lift up our voices to the Almighty God through our Lord Jesus Christ who you diligently and faithfully served to the end that He may grant you Eternal Rest in His Bosom. Daddy, we miss you dearly but it is our belief that God has His reasons for choosing this time, with God on our side, the flag will surely be kept flying.

You shall forever remain green in our cherished memory.

HOPE YOU ENJOY READING THIS, SHARE THIS WITH YOUR FRIENDS ON SOCIAL MEDIA

Related Topics:UDO EKANEM
Up Next